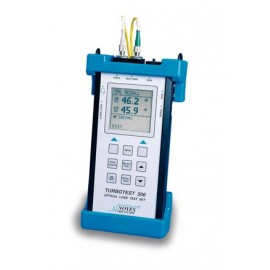 When two TURBOTEST 500’s are coupled together and operating in the “TURBO” test mode, both 1310 and 1550 nm link loss and return loss measurements are conducted. The TURBOTEST 500 utilizes single fiber bi-directional testing which provides the exchange of loss data and references between units. The non-volatile memory capacity of the combined TURBOTEST 500’s permits the storage of over 500 bi-directional fiber test results.

The optional dedicated voice port allows for full time communication between test operators while testing other fibers in a bundle. Designed for use on spare singlemode fibers, the TURBOTEST 500 offers quick connection to terminated FC style connectors. The voice port feature is useful where other types of communication are not available or desirable.

When performing tests in either of the four modes of operation (TURBO, OLTS, ORL, OPM) the stored results can be downloaded to a PC or printer for full fiber documentation.

The field rugged, fully portable TURBOTEST 500 is powered by the internal rechargeable batteries, alkaline batteries or directly from AC. These options allow the TURBOTEST 500 to be ready to test at any time!